Sydney is blessed with a wealth of natural attractions, flanked by mountains, national parks and water bodies. Tothe east you have one of the largest natural harbours, the Sydney Harbour.Towards the west you have the Blue Mountains, a World Heritage site rich in flora and fauna. So, it's no wonder Sydney has emerged to be a premier tourist destination withvisitors from all over the world. Hot summers in the Southern Hemisphere is another attractive proposition for tourists who wish to escape the harsh winters in the North!

Sydney has something for everyone. From the relaxed traveller to the adrenaline-seeking adventurer, there are enticing options for both. For those who want to walk the middle ground, you are covered on that front as well. For the history buff, you have the rich culture and stories that go back centuries.

Here are some places in Sydney that you should definitely check out if you are visiting Down Under.

One of the iconic attractions of Sydney, the Opera House is a must see landmark even if you are not interested in architecture or engineering. The sheer beauty and location of the Opera House might be the reason why millions visit it every year. Following a modern expressionist design, the Opera House still looks contemporary despite being over 40 years old!

Located in the heart of Sydney, the Royal Botanic Garden is another well visited location in the city. Opened in 1816, it is one of the most important historic botanical institutions in the world and a leader in conservation efforts and research. Open every day of the year, access is free to every part of the 30-hectare property. The Botanic Garden is a perfect place to relax and take in some lungful's of fresh air while in the company of Mother Nature.

The main hub of the city, Sydney Harbour is the place to be to get in the thick of all things. Getting on one of the many harbour cruise vessels will give you the low down onSydney Harbour. Located right beside the city, you can see the major landmarks like the Opera House &Harbour Bridge up close and personal while on a Sydney Harbour cruise. If you are feeling particularly adventurous you can try a Sydney HarbourBridge climb after the cruise.

One of the popular beaches, Bondi beach is a famous name around the world. Located close to the city centre, the beach is one of the most visited tourist attractions of Sydney. Stretching about a kilometre long, it receives tourists throughout the year, mainly due to the warm Australian climate. There are other beaches more beautiful than Bondi, but it definitely has a charm of its own!

Located less than two hours away from Sydney, the Blue Mountains is a perfect destination for those seeking a break from city life as well as for the adventurous souls. You can go for short walks or treks and explore the landscape. If you want to take a walk back in time you can also head to the nearby Jenolan caves which are said to be at least 340 million years old. 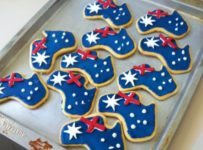