Tigers faced the danger of extinction. Thanks to the National Tiger Conservation Authority, we have high possibility spot big cats in these tiger reserves.

With over 63 tigers, which is the highest density in the area, Bandhavgarh Sanctuary is the best place to see tigers in India. Located in Umaria district, Bandhavgarh was announced a national park in 1986. Previously called as the land of white tigers, Bandhavgarh is also the territory of other wild animals like Sambhar, Chital, leopard, Indian bison, wild dogs, fox, sloth bear, and over 242 bird species. Located 600m above the sea level, you can book a gypsy to have the trip to Bandhavgarh Fort. The park is open from October to June but the best time to see tigers is from April to June.

Pench Tiger Reserve is one of the lesser known tiger reserves in the country. It is supposed be the inspiration behind Rudyard Kipling's Jungle Book. It has over 32 mammal species, including tiger in these deciduous forests among lakes and meadows. Here, tiger population is a bit more elusive. Pench Jungle camp is offering well-stocked library in safari tents along with other amenities.

Ranthambore is spread over 1443 sq. km and it is probably the most popular tiger reserve in the country and most of the tigers in tourism ads are shot here. Along with tigers, Ranthambore is also famous for leopards, wild cats, hyenas, sloth bears, crocodiles, foxes, and jackals. It has three lakes where wildlife may gather – Raj Talao, Padam Talao, and Milak Talao. You can also spot tigress and their cubs in the Bakaula area.

Kanha National park is truly a huge and picturesque national park. The sanctuary houses the most endangered species, Barasingha. Some of the other animals that are sighted frequently here are gaur, chital, 3-striped palm squirrel, jackal, common langur, black buck, wild pig, striped hyena, mouse deer, chinkara, porcupine, sambar, and ant-eating pangolin. While traveling to the reserve, you may want to pay for tiger show where elephants block tigers so tourists can look at them. Instead, it is better to go for safari where you can see them in their natural habitat. It is known for open meadows where animals can roam freely.

There are high chances to spot tigers over here. With low density of tiger population in India, Tadoba-Andhari Tiger reserve features high population of tigers. It has around 70 tigers along with sloths and leopards. 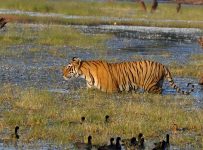 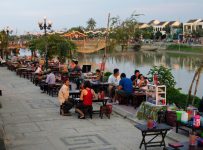 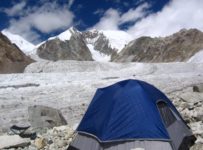